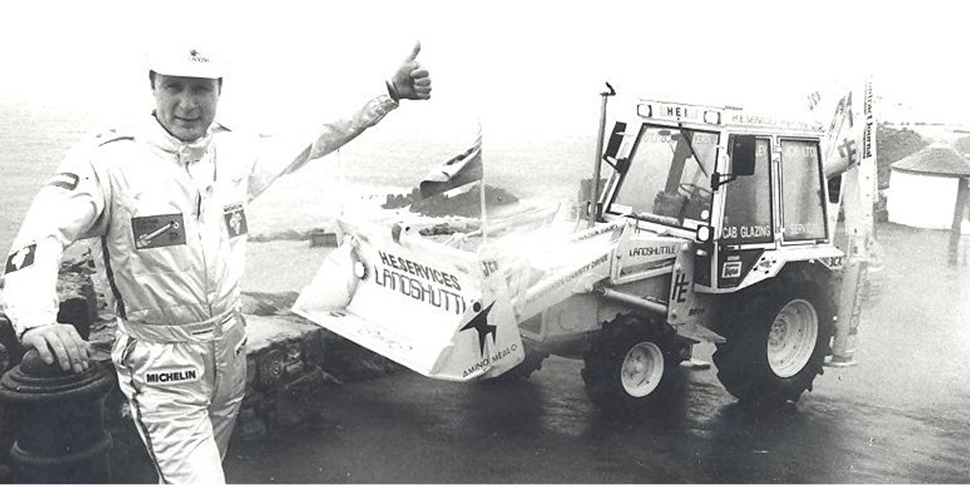 H.E. SERVICES (Plant Hire) Ltd. has thrown down the gauntlet to the British Digger Manufacturer JCB, by seeking to break their world record just set for the “Fastest Digger on Earth” in Australia.

The new world record was set in a customised JCB GT Backhoe Loader, driven by Matthew Lucas, by achieving a speed of 72.59mph, at Bathurst Airport, New South Wales, Australia on 21 October 2014. The JCB GT is however specifically manufactured for show and record attempts, and notably, it cannot dig!

H.E. SERVICES are extending the challenge to JCB, by attempting to beat the new record in their legendary, double record-breaking JCB LANDSHUTTLE, which still holds the record for the fastest time from John O’Groats to Land’s End in a Digger, set in May 1997 when it was followed all the way by a BBC Record Breakers film crew who produced a full program on the event.

The Silver LANDSHUTTLE normally leads The Diggerland Dancing Diggers, appearing at major County Shows in the Summer, however in Spring 2015 the LANDSHUTTLE will once again take to the roads, with the record-holding Chairman of H.E. SERVICES, Hugh Edeleanu, behind the wheel, in an attempt to reach a speed of at least 73mph in an 8 ½ tonne real backhoe digger!
The H.E. SERVICES team of expert engineers are already at work preparing the LANDSHUTTLE for the attempt, and efforts are underway to find a suitable test track for test runs and the record attempt itself.

The LANDSHUTTLE is a fully road legal JCB 3CX and may attempt the record on the public highway, though the sight of a Backhoe Loader reaching speeds of over 70mph on any UK road would probably attract the attention of the authorities, although they might not be able to catch it!

A date for the challenge has not yet been set but it is expected to be in the Spring of 2015.